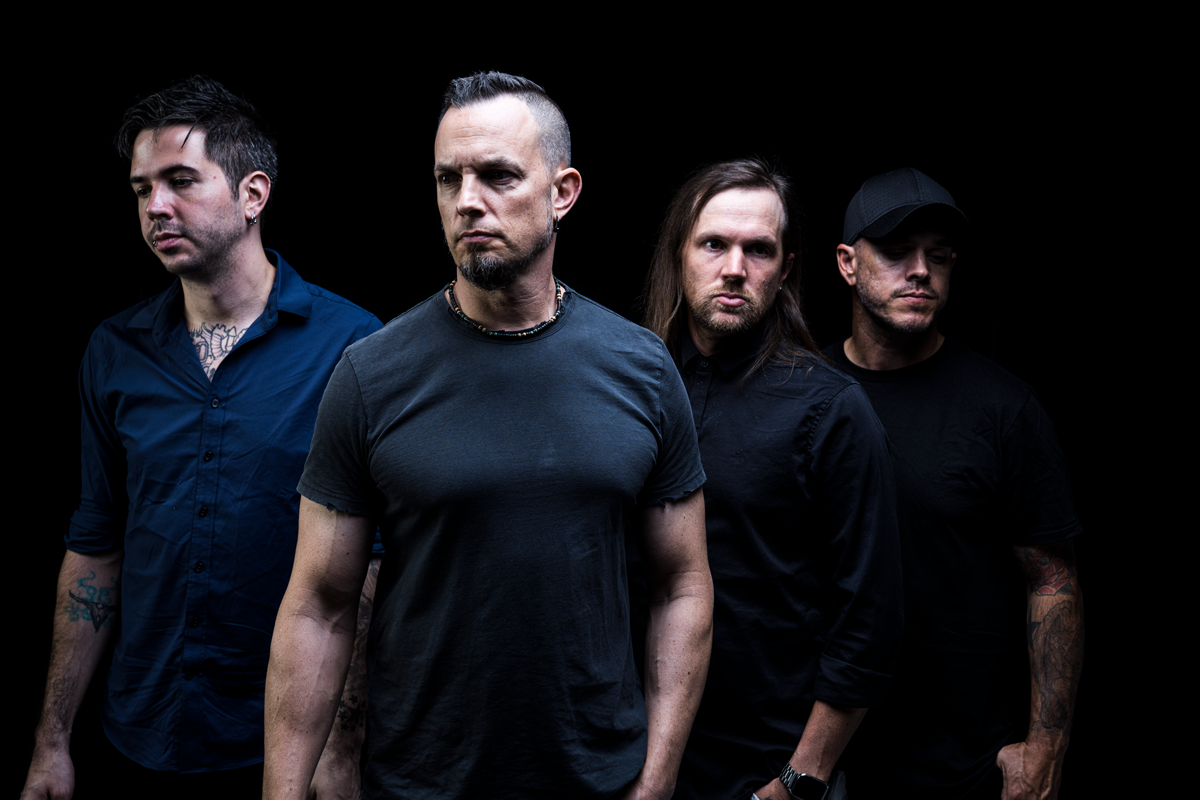 For as explosive as Mark Tremonti’s playing may be at times, he has quietly and rather unassumingly asserted himself as one of the most pure, precise, and prolific guitarists, songwriters, and frontmen of the modern era. With a GRAMMY® Award, recognition at #1 on Guitar World’s „Top 20 Best Guitarists of the Decade,„ and 40 million units sold between Creed, Alter Bridge, and his namesake solo band Tremonti, he maintains a breakneck pace in terms of both studio output and live shows. Once again, he directly channels this workmanlike focus, rigid discipline, and relentless drive into Tremonti’s fifth full-length offering, Marching In Time [Napalm Records], fusing uncompromising thrash-induced fret fireworks, wrecking ball grooves, and searing melodies all at once to present a definitive sonic statement.

“Anytime we do an album, I want people to know we didn’t just rest on our laurels and do the same old thing,” he exclaims. “We push ourselves and challenge ourselves when it comes to songwriting, lyrics, guitar, and every other instrument. We try to come out guns blazing. That’s one of the most important things to me.”

Tremonti drastically raised the bar with the 2018 conceptual opus and accompanying novel A Dying Machine. It bowed in the Top 3 of the Billboard Top Indie Albums Chart and marked the group’s third Top 5 debut on the Top Hard Rock Albums Chart. It received the highest praise of the band’s career to date. Beyond acclaim from Consequence of Sound, Metal Hammer, Brave Words, and more, LoudWire crowned it “their best album yet.” It brought the group’s total stream tally past the 100 million mark as well. Beyond packing headline shows, they also supported Iron Maiden on the road, rounding out a banner run.

As the Global Pandemic consumed 2020, he started to write, inviting co-guitarist Eric Friedman to Florida for preliminary sessions. However, he didn’t want to focus on the trials and tribulations of the year.

“At first, I asked myself, ‘Do I want to make a continuation of A Dying Machine and do another concept record?’,” he recalls. “I decided against it. I wanted to do something different this time. During the whole lockdown, I went through some moments where I was very uninspired. We moved in the middle of it, so I’d go paint my house or do other work. I was depressed like the rest of the world was, so I didn’t sit down with the guitar as much. However, I wasn’t going to just make an album about all of that. I tried to grab the best ideas and craft a really diverse body of work.”

Working with longtime producer and collaborator Michael “Elvis” Baskette, Eric contributed guitars, while Ryan Bennett played drums and Tanner Keegan held down bass duties. Now, Tremonti introduces the album with the eerily catchy “If Not For You.” Airy distortion gives way to deft shredding and a stomping rhythm as Mark warns, “So run now while you can, I will follow for now until the end.”

“It was one of my favorite tunes from the get-go,” he explains. “At first listen, you might think it’s about someone who loves another person. In my brain, it’s clearly about being overly obsessed and overzealous in their care—like a stalker.”

Hammering distortion introduces Marching In Time with “A World Away.” The syncopated percussion dissolves into a palm-muted speed metal gallop broken up only by a haunting harmonic.  Between soaring hooks, the finger-picked bridge adds another dynamic altogether.

“You promise yourself you’re not going to get stuck in some sort of vicious cycle where you feel no love,” he elaborates. “You’re urging yourself to do better and get out, but you’re just trapped. That’s the feeling of ‘A World Away’.”

Clean guitar curls around the drums on the blistering “Under The Sun.” It builds towards an apocalyptically catchy chorus.

“It’s a different vibe,” he goes on. “I pictured a civilization crying out to God like, ‘What have you done to us? Spare us. Help us through this dark time’.”

As something of a sister song to “Under The Sun,” the finale and title track “Marching In Time” stands out as the most epic composition in the Tremonti discography thus far. Brushing up against the eight-minute mark, its origins can be traced back to a guitar clinic Mark hosted on tour where he recorded the intro on Garage Band in front of attendees. He delivers an affirmation and pleads, “Don’t let this cold world change you.”

“I love doing these clinics, and it’s cool that the most important song on this record was born that way,” he states. “In terms of the subject matter, my baby girl was just born. I’ve got a three-month-old daughter now. When the world was a mess and it was looking pretty bleak, I thought of this concept. I needed to tell my kids, ‘Do not let this world control you. Don’t let it bring you down. Stay strong and be the person I know you can be’. It’s like some futuristic father telling his daughter and son to stay on the path even though everything is falling apart.”

In the end, Tremonti never stops forging ahead no matter what.

“I’m always going to keep going and picking up different elements along the way,” he leaves off. “I’m never going to put out the same thing. I just can’t wait for the rest of the world to hear this.”